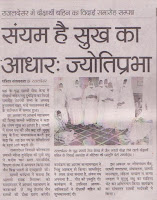 Jainism believes that from times immemorial, every soul has assumed perverted impure nature. Attachment and aversion are the soul’s impurities. All other impurities such as anger, ego, deceit, greed, and others are sub-categories of these two impurities. To help to remove such impurities, Jainism has emphasized certain practices to be performed regularly by its followers known as Ävashyaka (essential practices). These practices free the human mind from negative thoughts of attachment and aversions and enhance soul's spiritual progress which ultimately leads to liberation.

Ancient Jain literature defines six such activities of which Pratikramana is defined as 4th Ävashyak to be performed daily by its followers.
The six practices are:
1. Sämäyika Equanimity
2. Chaturvimshati-Stava Devotional Prayer
3. Vandanä Respecting Ascetics
4. Pratikraman Repentance and Confession of sins
5. Käyotsarga Non-attachment to the Body
6. Pratyäkhyäna / Pachchakhäna Religious Vows

Pratikramana
"Prati" means "back" and "kraman" means "to go", i.e. to go back, to reflect and review, to confess and atone for transgressions of mind, body, and speech in one’s daily activities. In other words, it means returning to and reaffirming the path of nonviolence, truthfulness, and non-attachment. Pratikraman means sincerely repenting and confessing our faults, forgiving faults of others, asking forgiveness from others for one’s own transgressions, and extending friendship to all.

The Pratikraman ritual includes many original texts (Sutras) written in Ardha-Mägadhi and Sanskrit languages. These Sutras consist of many hymns in praise of Tirthankaras and many verses of repentance, confession, and requests for forgiveness.
Jain community is divided into two main sects - Shvetämbar and Digambar. Again, Shvetämbar sect has two branches - Murtipujak and Sthänakaväsi. In these two branches six essential acts are performed daily. Monks of these two branches have to necessarily perform these acts in accordance with the tradition. Devoted Jain laypeople staunchly observe them. All others voluntarily practice them.

During the last few centuries of Jain literature work indicate that the word “Pratikraman” is used as a common noun for all six essential acts (six Ävashyaka). This is also meaningful because during the course of time the Pratikraman ritual is enhanced to include all six Ävashyaka.

Hence entire Pratikraman ritual which covers all six Ävashyaka or six essential acts, occupies such an important place in the Jain tradition as does Sandhyä in the Vedic (Hindu) tradition, Namäj in the Islam, Kharavela Avesta in the Zoroastrian, Prärthanä (Prayer) in the Jew and the Christian.

Pratikraman and Six Essentials:
1. Sämäyika - Equanimity
To remain in the state of equanimity without yielding to attachment and aversion and treat all living beings equal to one’s own self is called Sämäyika. This procedure is performed to cultivate equal regard towards all living beings, equanimity towards pleasure and pain, and to be free from attachment and aversion. The Sämäyika is performed at the commencement of the observance of Pratikraman ritual.
2. Chaturvimshati Stava - Prayer:
This is the reverential worship of the twenty-four Tirthankars to reflect on their qualities, such as freedom from attachment and aversion (Vitaräga). This devotional prayer is also of two types; external (dravya) and internal (bhãva). To express one’s devotion by worshipping them with good purifying substances like rice and flower is the external praise (dravya stuti). And to praise devotionally their internal natural qualities is the internal praise (bhãva stuti). The prayer inspires an individual to practice these ideals in one’s own life. During Pratikraman ritual, this is accomplished through the recitation of Logassa and Namutthunam Sutras.
3. Vandanä – Respecting Ascetics
Vandanä means offering of respectful salutations to all ascetics such as Ächäryas, Upädhyäyas, and other monks and nuns. The suguru vandanä sutra is recited during Pratikraman to pay respect and obeisance to the ascetics and teachers. .
4. Pratikraman – Repentance and Confession of Sins
Pratikraman means to repent and confess past sinful deeds and thoughts, to protect oneself through the process of spiritual discipline from the present sinful acts, and to prevent the future sinful acts through renunciation. Hence Pratikraman means to go back, to reflect and review, to confess and atone for transgressions of mind, body, and speech in one’s daily activities.
Alongside the six rites, the Jain ethics system outlines 12 vows of limited nature to be practiced by the lay people that are less intense than those followed by monks and nuns who have totally renounced worldly life. Jainism defines that every one should strive to adopt these vows according to one's individual capacity and circumstances. The ultimate goal is to accept them as full vows.

During the Pratikraman, a lay person reflects on these vows. One would repent and ask for forgiveness for one’s past minor transgressions that may have occurred knowingly or unknowingly. One would contemplate on each of these vows so that one would be more aware of such circumstances and would avoid such transgressions in the future.

If one only performs the Pratikraman ritual through bodily and verbal acts, and just verbally confesses the past sinful acts and makes open declaration not to commit them in future, but in real life one continues to commit sinful activities without any hesitation, then this type of recitation of ritual is called Dravya or external Pratikraman. The Dravya Pratikraman is not useful, but on the contrarily it is harmful. It deceives one own self and it meant simply to deceive others.

If after the performance of Pratikraman ritual, one minimizes or eliminates the sinful activities in real life then the Pratikraman is called Bhäva or internal Pratikraman, which is very useful for the purification of the soul.
During Pratikraman ritual, this is accomplished through the recitation of Ascetics Forgiveness Sutra (Abbhutthio Sutra), Atonement of Eighteen Sins (18 Päpsthänak), and Vandittu Sutra reflecting on Transgression of twelve vows of the laypeople.

5. Käyotsarga – Non-attachment to the Body
Käyä means body and Utsarga means moving away or rising above. Therefore, Käyotsarga means rising above the physical body activities to focus on the inner self and thus, develop non-attachment (Käyotsarga) towards our human body. To perform Käyotsarga in its true definite form one should also give up all the defilements from one’s life.

One needs to renounce attachment to one’s body to attain proper concentration, which is required for virtuous meditation (Dharma Dhyäna) and pure meditation (Shukla Dhyäna). During Pratikraman ritual, this is accomplished during meditation after repentance and confession of sins. Also the Pratikraman is performed while sitting or standing in the meditating position, practicing Käyotsarga throughout the ritual.


One can not attain true Bhäva Pratyäkhyäna without performing complete Dravya Pratyäkhyäna. Hence in the beginning one needs to renounce junk and tasty food, renounce all luxuries, and live a simple life. Now the true performance of Bhãva pratyäkhyäna (true renunciation) leads to stoppage of karma (Samvara) gives rise to ultimate equanimity (Sambhava) which in turn leads to the attainment of liberation.
At the conclusion of the Pratikraman one chooses to observe certain vows (within one's own capacity). This practice fosters spiritual advancement through self-control.

Jain literature clearly indicates that Pratikraman ritual is meant for repenting and requesting forgiveness for “one’s past minor transgressions of the vows that may have occurred knowingly or unknowingly”. The vows for monks and nuns are 5 great vows and for laypeople are 12 vows of limited nature. Hence only monks, nuns and laypeople those who follow these vows are eligible for Pratikraman. The logic is that if one does not practice the vows then question of repenting and forgiveness of minor transgression of the vows does not arise.
Many Jain laypeople do not practice 12 vows. Hence after understanding the purpose and meaning of our great ritual, every Jain should strive to adopt the 12 vows of laypeople according to one's individual capacity and circumstances. They should review them before Samvatsari Pratikramana and improve the limit every year in such a way that ultimately they will be full vows.

Hence by performing Pratikraman one completes all six essential acts which are required by Jain tradition for our spiritual progress.
Posted by Pragya Pathaey PANKAJ DUDHORIA No comments: Links to this post